Use of Python in Big Data Analytics, Forecasting & Machine Learning 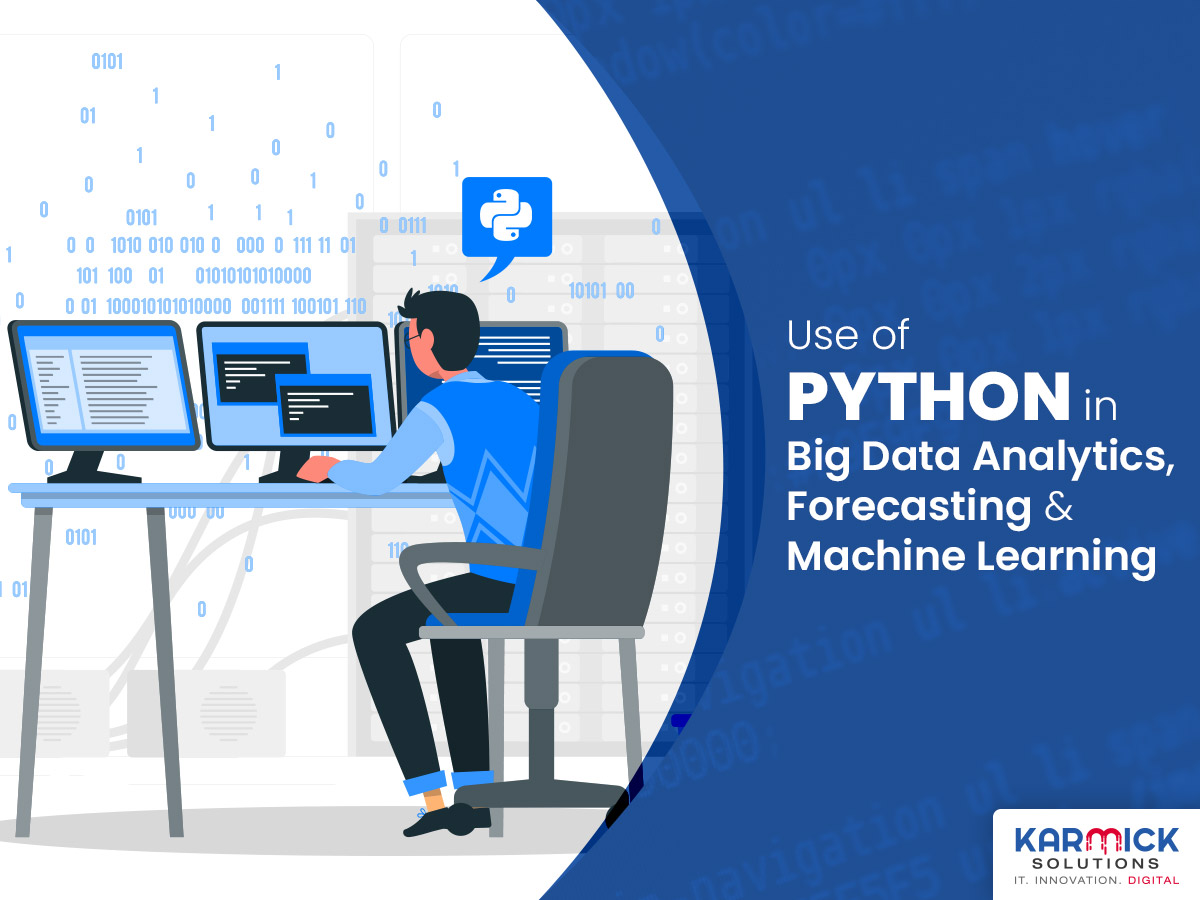 Do you know that Python has overtaken French in schools as the most popular language? As per a 2015 survey, about 75% expressed their interest in learning Python instead of learning French! It is well-known that Python is at present one of the most widely used programming languages for building a large variety of desktop GUI and web applications. However, it is also vital to note that Python is now used increasingly in big data analytics, forecasting, and machine learning. Let’s explore the use of the general-purpose programming language in different fields. However, before doing the same, it is necessary to know why it is the preferred language for application in these evolving fields.

“The joy of coding Python should be in seeing short, concise, readable classes that express a lot of action in a small amount of clear code, not in reams of trivial code that bores the reader to death.” -Guido van Rossum

The above quote by the creator of Python speaks volumes about the brilliance of Python as a programming language. According to the HackerRank developer survey conducted in 2018, “JavaScript may be the most in-demand language by employers, but Python wins the heart of developers across all ages, according to our Love-Hate index.”

So, some features of Python help it to stand out amidst the rest of the popular programming languages and makes it apt for big data analytics, forecasting, and machine learning.

Be it a project of big data analytics, forecasting, or machine learning, the simplicity, and versatility of Python prove a boon for programmers! Instead of focusing on language complexity, what they have to do is to only focus on the problem. The simplicity of the highly dynamic language eliminates the need to spend extra hours in structuring or memorizing the syntax. If a developer needs a code that can work on different platforms such as Linux, Windows, or macOS, the cross-platform language is the perfect answer. Also, it is undergoing continuous advancements. Regular updates are there that make it quite versatile for any software development for any device. You may be surprised to know that a wide range of frameworks is available for Python.

You may have heard how Hadoop is the backbone of all big data projects, but you may not know that it also meets machine learning! Hadoop is also now widely used in sales forecasting. It has a distributed file system (HDFS), which offers quick data access across the nodes within a cluster. It also provides capabilities for fault-tolerant to enable applications to continue to run even if there is a failure in individual nodes. So, developers had to go for a programming language that is compatible with Hadoop, and Python perfectly fits the bill. This compatibility of Python with this popular software development framework helps programmers to build projects in big data analytics, forecasting, and machine learning with minimal effort.

Also, it is vital to note that there is an availability of frameworks that are python-specific. Some of these are as follows:

Apart from the above ones, developers can also use some other Python-specific frameworks with Hadoop, such as octopi, happy, Luigi, and much more.

We all know that before the advent of big data analytics, forecasting, and machine learning, we have statistics that use mathematics to study patterns. To understand the data insights, Exploratory Data Analysis (EDA) was one of the preferred ways in statistics. However, now data visualization is used widely for deepening our understanding of data, and it is also one of the crucial steps in emerging technologies. It can offer rare data insights that a developer fails to see by examining the data. Python here scores some brownie points as it has some of the most interactive data visualization libraries that you can have at this present moment! So, have a look at some of these libraries.

Here, it is essential to note that Matplotlib can be seamlessly integrated with NumPy and Pandas that makes it all the more favorable to use as a python data visualization tool. The availability of such data visualization libraries from Python is helping data scientists all over the world to pay more attention to the larger picture of the data at each level. They can now focus more on the meaning of the data, design, and performance of a data model.

“Python has been an important part of Google since the beginning and remains so as the system grows and evolves. Today dozens of Google engineers use Python, and we’re looking for more people with skills in this language.” -Peter Norvig

The above quote by the Director of research at Google, Inc perfectly resonates with the opinions of other companies. With so many brilliant features, it is not surprising that world-class companies are today extensively using Python. Apart from Google, some of these are Facebook, Quora, Netflix, Spotify, Reddit, and Instagram.

The open-source programming language also has some other powerful libraries such as Pandas, NumPy, SciPy, Dask, and MlPy that has made it a darling of data scientists. Python also has the support of a large number of worldwide developers.

Moreover, it is a known fact that a massive amount of data is involved in building applications for big data analytics, forecasting, or machine learning. So, here scalability is always a big concern, and Python has emerged as a highly scalable language.