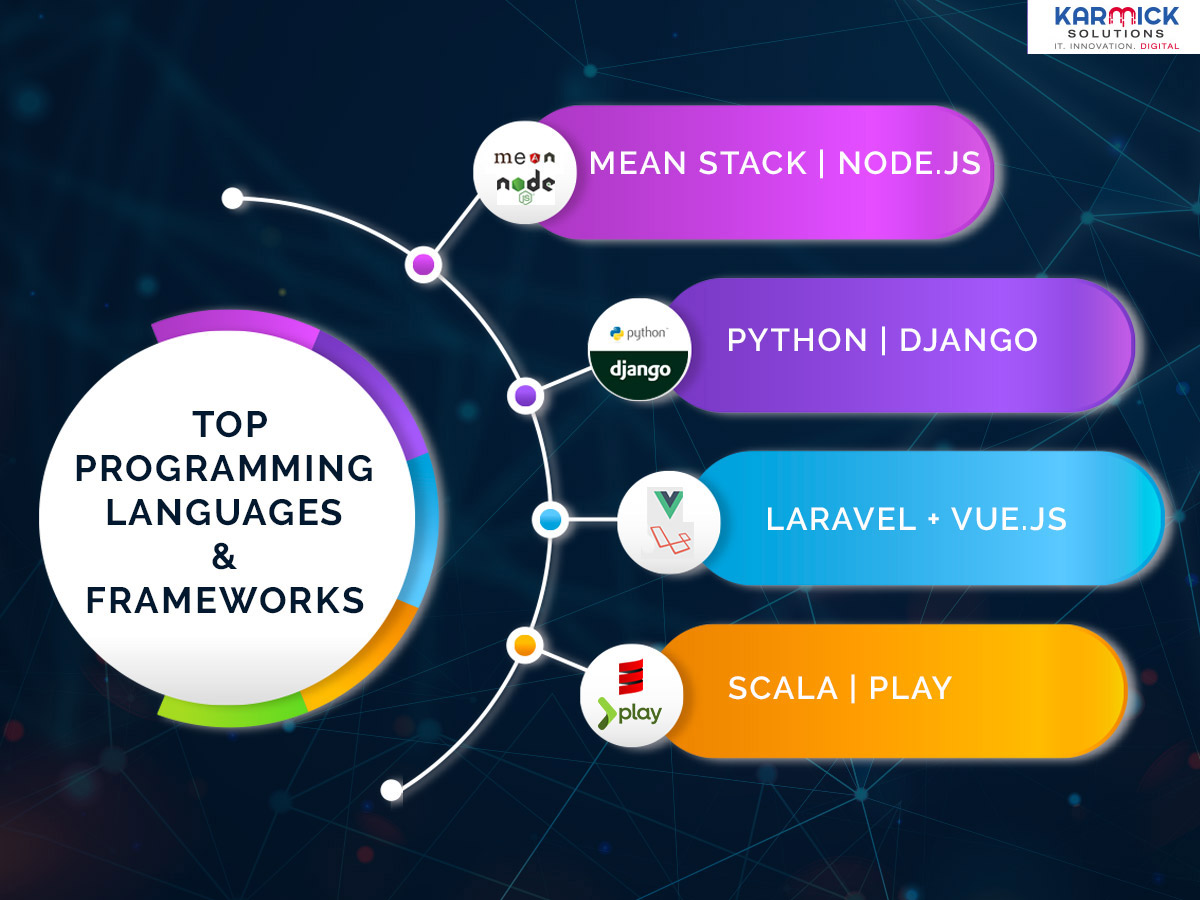 MEAN stack is a relatively new stack. It has an amalgamation of technologies which makes it a perfect framework for building robust websites/web applications. Here, MongoDB, ExpressJS, AngularJS, and Node.js are all bound together by JavaScript. As in MEAN stack, every single component of the web application is in the same language, the development process is fast, less cumbersome, and neat.

While MongoDB is a scalable database and ExpressJS is a backend web application framework, AngularJS is an open-source front-end web framework. However, it is the Node.js that makes the MEAN stack the preferred choice for start-ups. The well-known run-time environment with a non-blocking architecture works as a web server and aids in fast deployment of applications built with Mean Stack. Do you know that some of the well-known organizations across the world such as Netflix, eBay, Paypal, and NASA trust Node.js?

Intuitive and easy-to-understand, Python has a vast community that helps developers to resolve issues and perform coding quite fast. If your start-up is likely to develop both small and large-scale applications, this proves ideal. The run-time is a bit slow, but start-ups are falling in love with the language as it is found to be apt for building chatbots, image recognition software, predictive analytics software, and much more!

Released in 2005, Django is the open-source web framework that is used mostly with Python. One of the major reasons because of which the framework is ideal for start-ups is that it aids in rapid development and has MVC core architecture. It also offers scalability and reliability which are always much desired by start-ups.

Still, many do not go for Python as they assume that it is more capable of only building machine learning and artificial intelligence applications. In this aspect, it may sound interesting that Instagram is powered by Python on its backend. Several other popular websites are also built using Python.

There is no doubt in the fact that PHP as a general-purpose programming language is powering millions of websites across the web. Even, the million-dollar Facebook relies on PHP! However, it also has some limitations which you could overcome if you use the Laravel framework with Vue.js which is also a framework. Vue.js is a progressive framework that can be used for building both desktop and mobile applications. The featherweight framework comes with concise documentation and strong community support that further makes things easy for developers.

On the other hand, Laravel comes with an expressive and elegant syntax which makes it a darling of the developer community. It is also open-source which makes it cost-effective. So, if you look at all the aspects such as cost-effectiveness, time to market, and ease in hiring developers, Laravel with Vue.js is an ideal combination for start-ups.

The programming language has been around for over a decade. Designed in 2004, the language was developed to find answers to some of the limitations of Java. So, it is obvious that this is compatible with Java. However, the reason for which it could be best for you is its terrific run-time that lets you build high-performance, reliable, scalable, and fantastic web applications! Despite all the brilliance, the programming language is still not popular like other mainstream languages.

However, when start-ups came to know that biggies such as Twitter, Linkedln, Swiss Bank UBS, and Coursera are leveraging the power of Scala, the apprehensions around using the same become less. Start-ups are using the same with the Play framework which is an open-source Scala framework that leverages JVM and its related libraries. It is easy to make web applications when you have the Scala Play framework.

To make the right choice, you need to be careful a lot. Whatever you choose, it must be scalable. At the end of the day, what matters most is the expertise of your developers. Programming languages and frameworks come next. Still, you should consider about speed, performance, scalability, and run-time environment.